Why is marriage such a pressing issue?

Mostly in small or second-tier towns, like the one I belong to, a girl, as soon as she attains the age of twenty, the talks of her marriage start hovering around the entire neighbourhood. In some cases, the age above is replaced by the legal age, that is, 18.
The mentality, as I reckon, is still very mediocre as regards independence and marriage in the minds of the people. 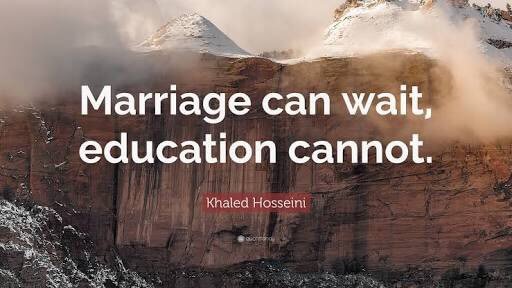 The world has moved on about considering a girl child as a burden, a curse, but India still marches on the same road. We live in that part of the world that worships Goddesses and mocks the women in the perfect harmony that there could be. India has always been a mixture of contradictory beliefs.
Where this is quite certain in the minds of people that marrying off their daughter is the best they can do for her, they fail to take in reality. They fail to accept that they do not live in the ancient era that only allows a woman to be meek and compromising. To be pleased and thankful to be living under a man’s protection.
With the change of era, the meaning of marriage has significantly changed. Today women need not only protection from the outside but also the inside. They need to be independent; they need to know things that can help them survive in this world.
The male-dominated society, however, has managed to sow the seeds of early marriage as a blessing in disguise in the minds of the women they have respectfully brought in their houses. To feel validated about everything they do and every decision they make.

The reason for early marriage? The girl’s mind isn’t mature, and she’ll do as is told, learn to adjust, and settle as per the requirements of her far older and mature husband. And, of course, will easily bend to the whims of her in-laws, whatever those might be. Without understanding that what she is doing, unknowingly, is making her own life miserable, pleasing everybody, and not caring about her wishes, aspirations, and needs. Let’s hope she gets a somewhat understanding and caring husband, who cares about what she thinks. In the case of the contrary, let’s hope she finds it in herself to either make peace with her fate or finds the courage to speak her mind out.

And that’s not where the problem ends. Before the girl realizes what’s happening with her, she bears a child. That throws out every thought that could make her revolt, for the sake of the child, of course.
And you’d think that’s where things come in her hand? You couldn’t be more wrong! If ever, she decides to revolt, the threats from her parents would be so unashamedly selfish, that she’d prefer to burn in hell instead. You’d wonder she’d be able to turn to her parents for the respect and help she needs, erm, no, that’s where status and society enter. ‘What would society think and say?’ becomes a more significant concern for the parents than the well-being of their child! This mindset that still clouds the minds of a large number of people in our country, if not all, certainly not all.
But are only the parents to be blamed? Girls often dig the grave of their careers themselves by willfully succumbing to the societal trends of getting married as soon as they can. They fail to realize the consequence of abandoning the only means of their survival, education, in their eagerness to please the society. God forbid, if anything were to happen to make their life miserable, any abuse or violence, they’d either live in that misery till the day they die or will resort to the severe alternative, suicide. The need of the hour is the realization that marriage can wait education cannot.

Teach your daughters to stand up for their rights rather than to make compromises at all times. Not that I oppose adjustment because that’s impossible. For a healthy marriage or for that matter for any healthy relationship, change and compromise are the deciding factors. But there should be a balance, a harmony, a blend of understanding from both sides. You can’t possibly ask a person to make all the sacrifices while you dominate the ride.
And before teaching your daughters about compromise, teach them how to earn a living. By not entitling your daughter with her right to education, you’re actively contributing to the possible downfall of your daughter’s life.
Girls, work it out, make it possible to blend career and marriage instead of choosing one over the other. If not, then establish a fair means of income before taking a lifelong subscription of holy matrimony. Break the shackles of pathetic traditions that cast an eternal shadow on your existence. Always remember, marriage can wait education cannot.
What do you think? Which should come first? Share your experience and advice in the comments below.
Until next time,
Let’s make the world better in our little ways.
Bye Bye! 🙂