TRY and TRY AGAIN and You Will SUCCEED!!! 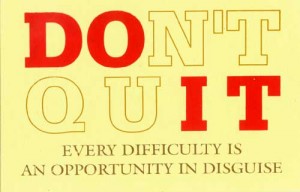 When things go wrong as they sometimes will,
When the road you’re trudging seems all uphill.
When the funds are low and the debts are high,
And you want to smile, but you have to sigh.
When care is pressing you down a bit,
Rest if you must, but don’t you quit.

Life is queer with its twists and turns,
As everyone of us sometimes learns.
And many a fellow turns about,
When he might have won had he stuck it out.
Don’t give up though the pace seems slow,
You may succeed with another blow.

Often the goal is nearer than
It seems to a faint and faltering man.
Often the struggler has given up,
When he might have captured the victor’s cup.

And he learned too late when the night came down,
How close he was to the golden crown.
Success is failure turned inside out,
The silver tint of the clouds of doubt.

And you never can tell how close you are,
It may be near when it seems afar.
So stick to the fight when you’re hardest hit,
It’s when things seem worst that you mustn’t quit.

And that’s worth thinking about.

This poem just blowed my mind as soon as i read it, the one who wrote it is not known but must have been a great person…

Raise your voice with Montu! #AbMontuBolega

Yesterday, while driving alone through the market place of my town, I had my observant mode on. The swachch bharat ad came on the radio. Quoting the Prime Minister, Shri Narendra Modi’s message on Swachh Bharat. “Dear...

Who would say no to a flashback to their childhood? Well, I don’t know your answer but I certainly won’t say no! Blogadda has provided me with this...

Last night while watching T.V. after such a long time, an advertisement just striked a cord! All of you must have seen Vidya Balan’s ad favouring cleanliness and sanitation facilities in Indian villages or rural...