Nandi Hills: A Drive into the Clouds

The Nandi Hills or the Nandi Betta is a famous viewpoint located in the Chikkaballapur district of South East Karnataka. Once known as Nandidurga, the hills were a part of an impregnable fortress that was manned by Tipu Sultan of Mysore. There are hundreds of tourists who visit the Nandi hills on a daily basis to view its exquisite sunrise. An early morning drive to Nandi Hills is one of the best ways to spend a short weekend. 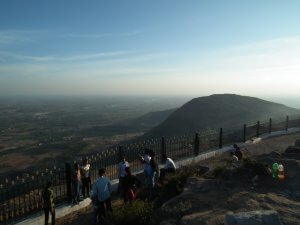 There are many self-drive cars in Bangalore, which can be chosen to drive to Chikkaballapur. Self-drive is the best option to enjoy privacy and complete freedom to change plans and make impromptu stops. The travel distance from Bangalore to Nandi Hills is around 60 kilometres.

The most important attraction in Nandi Hills is the view it offers of the sunrise. Located at 1479 m above the sea level, early mornings at these hills present the view of the clouds on a platter. There are also a lot of hotels available on the hill that offer a stay to catch the sunrise early. Apart from the natural view, the hills play home to different and rare species of birds and plants. Therefore, it is a haven for a lot of birdwatchers and photographers to visit and capture these species in their natural habitat.

A part of the original fort still stands in the form of the Tipuâ€™s Summer Palace. Although it is closed off from the general public, the palace contains secret passages, routes, and a separate horse way from where soldiers were said to enter the palace on horseback. The second important souvenir of Tipuâ€™s rule is the Tipu Drop. Located on a hilltop cliff, this 600m elevated platform was believed to be used by Tipu himself to throw down his enemies to death.

Nandi Hills has become a hub for sports enthusiasts as well. Although it is in its initial stages, the hills host the activity of paragliding. Another sports activity gaining popularity at this place is cycling or biking. The slopes of the hill offer around 400m of altitude gain and act as training grounds for most visitors during the weekends.

There are a number of temples to visit the destination. The Gavi Veerabhadra Swamy temple is present en route to Sultanpet from Tipuâ€™s palace and was naturally formed from rocks and boulders. Some other temples like Sri Bhoga Narasimha Temple, Sri Ugra Narasimha Temple, and Sri Yoga Narasimha Temple also hold a mirror to the history of this place.The horticulture department has also maintained a garden for children to play in.

A weekend up the hills of Nandidurga will surely leave visitors feeling refreshed. For those who do not own cars, rental services like Zoomcar have introduced affordable rental plans, which can be changed in real-time according to driving requirements via an app-based system. Tourists can pick a self-drive car rental and have a gala time amidst the clouds of Nandi Hills.