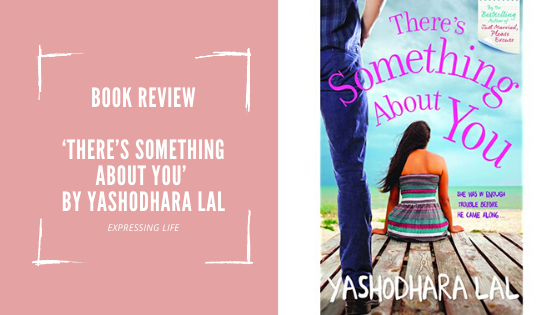 Book Review: ‘There’s Something About You’ By Yashodhara Lal

Radhika Mundra
2 comments
4 min read
Book Review: There’s Something About You
~Zumba’s all the rage~

So, here is my review of ‘There’s Something About You‘ by Yashodhara Lal–

Back Blurb from the book–

This is not your typical boy-meets-girl story. Okay, they do meet, but there are some complications.

Trish is twenty-eight. She’s unemployed, overweight, single and snarky. She knows all that. And if one more person – just one more person – tries to fix her, she might explode. Sahil is thirty-five. He has superpowers. Well, kind of. He seems to think so, anyway. He’s also hot (okay, in a geeky kind of way, but still). And he plays the guitar, helps the underprivileged and talks about his feelings. Aren’t guys like that supposed to exist only in fantasies?

When Trish and Sahil meet, magic happens. Real magic, you know, like fireworks, electricity, that sort of thing. But here’s the problem. Trish doesn’t want anyone in her life. She has enough to deal with – dependent parents, flaky neighbours, bitchy editors, the works. And yet, Sahil is determined to be in her life.

From the bestselling author of Just Married, Please Excuse and Sorting Out Sid, here is another zinger of a book.

Plot- This is the story of Trish, a big, fat unmarried and independent girl in her late twenties who has a sea-faced matchbox to live in, in Mumbai, which she shares with her dependent parents, an ailing father (Alzheimer patient) and a nagging mother, but doesn’t have the money to support it because she just got fired from a company where she worked as a Content-head for the Internet department for 7 long years because, well, she wasn’t hip enough to handle a new fashion portal. The only person Trish has in the name of a friend is Akanksha who has a completely opposite life from that of her own.

Soon after Trish manages to save a drowning man (almost drowning herself in the process) who had attempted suicide, life begins to change. She gets a chance to write an agony-aunt sort of column for the same paper she was working for previously, as a freelancer while searching for a stable job which she manages to make the most read column of the paper soon with her witty, loaded-with-sarcasm answers. Also, she gets promoted to being Trish masi from Trish Aunty of Akanksha’s seven year old daughter, Lisa.

Then enters the male lead, Sahil, who has his own set of troubles which make him psychic, at least, that’s how he likes to call it while other humans would easily call it a superpower! He finds a strange connection with Trish and is determined to be in her life when Trish has clearly left no doors open.

Coincidences, tragedies, and uncovering old family mysteries- everything happens with a fit of love and laughter. Dealing with a bitchy boss, persistently complaining mother, a fragile father, a depressed little girl and a psychic partner, Trish has a lot to take on. Read to find out how!!

Yashodhara Lal is a marketing professional and the mother of three children, apart from being a bestselling author. She graduated from IIM Bangalore in 2002 and manages to balance her professional life with her various interests, including fi tness, writing and music. She lives in Gurgaon with her rather tolerant husband Vijay and their kids nicknamed Peanut, Pickle and Papad, all of whom never fail to provide her with material for her entertaining blog at yashodharalal.com. Her fi rst book, Just Married, Please Excuse is a hilarious account of marriage. Her second novel, Sorting Out Sid is the story of a man having an early midlife crisis and consequently, a divorce. There’s Something About You is Yashodhara’s third book.

Personal Opinion: One word- Hilarious! I enjoyed reading every single word of it, truly. Even though I’m not much of chick-lit fan, this book has made it to my recommendation list to be enjoyed over the weekend. A light read, do not expect some super intense romance or thrill, but a lot of laughter, that I can promise! 😀

Grab your copy from the stores now!