Radhika Mundra
10 comments
7 min read
The excitement at the year end gets to everyone and so it did to me. I packed my bags and went off to Jaisalmer with my cousins to celebrate the new year’s eve and enter the new year with a blast.

So before I get into the details of what all we saw there and stuff, I’d like to take a moment to tell you all that last year was amazing for the blog and thus for me, all thanks to you guys, the readers. I can be sloppy and not post for days but you guys just keep the blog breathing. I thank you all, from the bottom of my heart, thank you. My hope for this year: The time you devote into reading my blog increases tenfold and that I keep writing my heart out amidst all the chaos.

Jaisalmer is at a distance of faintly 270 km’s from Jodhpur. We took a road trip to and from Jaisalmer and it was fun!

Fun Fact: I’m not a road trip person, at all. I sleep through most of the way and wake up to take a picture or two of the surroundings if found interesting enough. Also, I bag the most comfortable seat which comes bearing the animosity from a few other people riding along.

So, as we entered the city and got comfortable in our respective hotel rooms, the plan to visit Sam Sand dunes was devised.

Once there, we enjoyed the desert safari: Basically, you are taken to a tour of the desert with nothing, in particular, to be shown but sand all over in an open jeep which is driven at a very fast speed.

You stand on the backside like the picture below and let the wind take control, not really because then you’ll be lost in the sand somewhere, forever. Just kidding, they’ll find you.

I don’t have any of the pictures of our doing the same because we all were enjoying the ride swinging and hitting each other while the wind ruled and the golden sand blew about everywhere else. It was more fun because the wintry cold wind made sure we tried not to get hit which made us hit each other all the more.

It was one hell of an experience. I’d give anything to do that again! A pity that we had to visit other sites too that we couldn’t come back for more.

The safari leaves you at a certain spot in the middle of nowhere to enjoy the beauty of the desert and the sunset while they take the other people they left earlier back to the starting point.

We decided to ride the camels and yes, more fun to come. It was great, the ride, more so because my sister just couldn’t stop screaming of an irrational fear that she’d fall.
Since it was nightfall, the pictures I had taken are not so presentable.

Tip: When you do ride the camels there, make sure you have someone from Jaisalmer to guide you around. These guys, they take you around and don’t let you unmount until you pay them a lot more than was initially decided. They call it ‘Bakshish’. Takes me all the way to Baghdad.

After the ride, it was time to head back and our ride was waiting. The ride back was even better because the winds were a lot colder than in the evening.

But the best is yet to come. Have you seen the night sky? Were little stars shining up there? How many do you think have you seen, at once, at most?

I? I’ve seen mostly 20-30 of those shiny things twinkling in the sky from my home. But that record was broken when I saw thousands of them shining right above me, illuminating the sky. It was indeed, a blanket of stars.

This is what you can see if you wait until later:

The beauty of those natural balls of light is beyond expressions. I can’t describe that feeling. The air around us, in my hometown, is so polluted that I hardly see any stars. There, in the desert, in a natural realm, lay the beauty that most of us, the city people, are unaware of.

Moving on, we had lunch at a colourful restaurant and headed home (the hotel). We were all tired after the day’s travel and went to sleep without much ado.

The next day, we took a trip to a village situated 180 km’s from Jaisalmer, Tanot. Situated there is a renowned temple called the Tanot Mata Temple.

Why renowned? I’ll tell you why.

It is said that during the Indo-Pakistani War of 1965, Pakistani Army dropped several bombs targeting the temple but none of the bombs could fall on the temple and large numbers of bombs in the vicinity of the temple did not explode. After the war, the temple management was handed over to Border Security Force of India. On this date, Border Security Force Jawans man the temple. The temple has a museum which has collections of the unexploded bombs dropped by Pakistan.
(Source: Wikipedia) 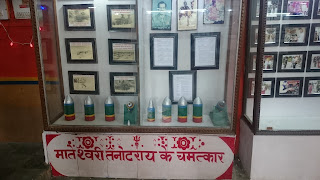 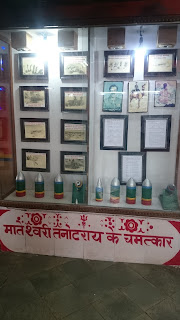 We saw the bombs and the pictures from the war. It might sound superficial, but it’s true. There is hard evidence supporting the incident.

On our way to and from the temple, we saw a lot of interesting stuff.

1. This tank was captured from the Pakistani Army during the abovementioned war.

2. This is India’s one of the Tallest TV towers located in Ramgarh, Jaisalmer, Rajasthan.

Fun Fact: It’s useless. After the construction, while setting up the connection, it was discovered that the network would reach Pakistan and, of course, that’s unacceptable. So, that’s basically a 300 m high waste of resources.

4. These pictures of rising and setting Sun. 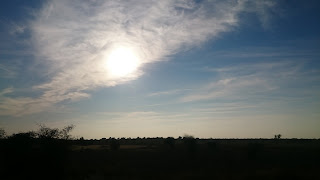 6. We also went to this place that I don’t remember the name of. What I do remember is that it was a graveyard. A graveyard where the kings were buried. It was a beautiful sight and creepy. I did not have much interest in this place as one such exists in Jodhpur as well but we made sure we took enough pictures here! 😀

7. This message of peace by our soldiers: 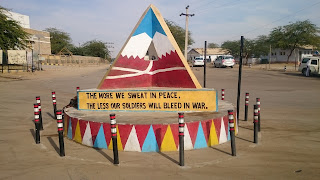 Moving on, we went to the hotel and got ready for the party for New Year’s eve. It was a blast. From magicians to performers and puppet shows, amazing. Yeah, I’m lying. Who calls that a party? The party started at 11:00 when an old man snapped and told the host that we all wanted to dance. That’s when the party started. We all entered the new year with music blazing from the speakers and fireworks in the sky and the cheers of ‘New Years’ on the dance floor.

The next day, we visited the Jaisalmer Fort and ate in an Italian Restaurant. The fort was, although disappointing, quite a good exercise after cruising around in the car for so much time.

No pictures from the fort. I have a video of the Armoury there which was the only thing that intrigued me. I’ll try to embed it here.

After the fort, we set out on our travel back home, Jodhpur. After hours of travel, we reached home at around 10’o clock at night and dined out. That’s when I first felt a little uneasy. That day after, my health has only deteriorated. Have been bedridden for around 6-7 days and still capable of coughing to death. This is also the reason why I am posting my first post of 2016 ten days after it started.

Thankfully, I have been able to study and that’s the a big relief. I hope all of yours comments work as my blessings! xD

Before I take your leave, I wish you all a great year ahead with lots of adventure and excitement, happiness and success! 🙂

I’d love to know how this year is treating you. Let me know in the comments!
Be kind to one another.
Bye Bye! 🙂